Using MxVDev and Microsoft Visual C++ together to debug SUT applications gives developers a huge advantage at developing and debugging their application. MxVDev can be used to test requirements, to provide a visual picture of the state of the executing application, to setup inputs to catch a bug in the code, or to watch changing outputs. Microsoft Visual C++ provides a fully featured development environment to debug and develop SUTs while they are being tested and subjected to inputs and test cases by MxVDev.

To enable/disable Just-In-Time debugging with Visual C++ 2003 or later:

2.In the Options dialog box, select the Debugging folder.

3.In the Debugging folder, select the Just-In-Time page.

4.In the Enable Just-In-Time debugging of these types of code box, select or clear the relevant code types. For debugging C code, as is used in the MxVMC, select Native. 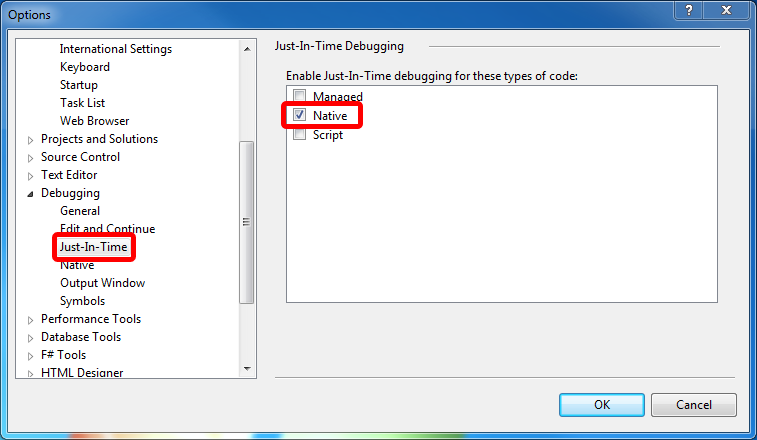 The SUT application must be built with no errors before debugging the application is possible. Start the debugger by selecting Start Debugging under the Debug menu (or by pressing the F5 under VC++). This launches the debugger, which launches MxVDev, loads the MxV project, and attaches the SUT to MxRTE.exe. Visual C++ debugger might display the following warning message:

Debugging information for 'MxRTE.exe' cannot be found or does not match. Binary was not built with debug information. Do you want to continue debugging?

Breakpoints can be placed anywhere in the SUT code (such as SUT_Init(), SUT_Tick(), and MxVOpen()). Once a breakpoint is hit, the Visual C++ debugger pauses the execution of the SUT at that line of code and MxVDev pauses the executing scenario waiting for the SUT to continue running. While debugging the SUT, users have the full advantage of using MxVDev to see the actual state of the application by monitoring the inputs and outputs and have the fully featured debugger to place breakpoints, watch variables, step through the SUT code, and use the memory window.

If you experience an issue when debugging where hitting a breakpoint produces a disassembly rather than the source code, you must change the Debugger Type for the Visual Studio project as follows:

1. In Visual Studio, right-click the project in the Solution Explorer and select Properties.

2. Select Debugging on the left hand side of the dialog box.

3. Change the Debugger Type to Native only. See Visual Studio and MxVDev.

Timing and Performance Considerations for Co-Simulation