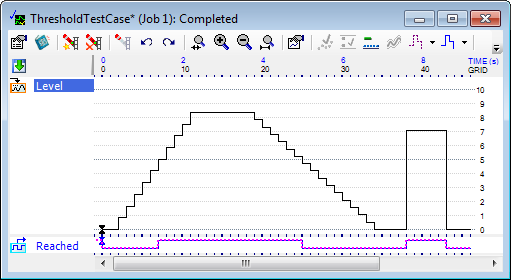 The Threshold Trigger Transform is similar to the Threshold Detector with two important differences:

•Its outport is of type Event.

•The Threshold value can be set by a Signal rather than a property. Therefore, the Threshold can be changed during test execution.

For most applications, the Threshold Detector Transform is recommended.

The Threshold Trigger Transform has two numeric input ports. The In signal is compared to the Threshold signal. The type of comparison (equal, greater than, less than, greater than or equal, less than or equal) is determined by the Trigger Type property. Note that if you are using a continuous Signal it may not be possible to meet the equal condition, so <= or >= are recommended.

•When Level Detection is set, the trigger is fired every time a transition on the In Signal passes the comparison test.

The Fire outport is an Event signal. A transition is transmitted when the trigger is fired.