The Delay Transform delays the delivery of transitions for a specified time or a tick period. (Other Signal Processing Transforms read their input ports and transmit from their output ports in a single tick.)

A single Delay Transform can have multiple input and output ports. When a port is connected, a new port is added. Note that, by default, the input (right side) and output (left side) ports are reversed compared to other Transforms.

There are several cases where it is necessary to delay transitions until the next tick of the Harness (Z-1):

•From a control point of view you may just want to slow the progression of a transition. For example you may want to produce two Signals that are out of phase (like a quadrature output).

•More importantly, you may want to take an output Signal from a Transform and feed it back into your model at a point upstream. It is only possible to do this if you use the value of the Signal from the last tick cycle. A simple example is when you feed back the output of an Or gate to one of its input legs. This produces a latch. The feedback path has to include a Z-1 Delay Transform.

•Interconnections between SUTs (Connector Transforms) require a Z-1 Delay Transform, unless the IsSUT or Treat as SUT property is set to False.

•In a closed-loop control system, you typically have two models. Outputs from each model are fed to inputs of the other. In this case, all signals that pass between the blocks need to pass through a Z-1 Delay Transform. The SIL Easy Cruise Control Sample Project demonstrates a closed-loop system using delays.

•Delay Type – Select if incoming transitions are to be delayed by one tick or an amount time.

•Time Delay – The amount of time, in seconds, to delay the incoming transitions. 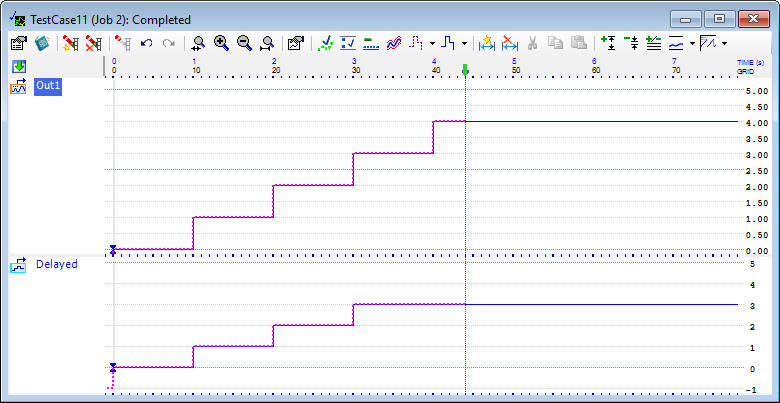